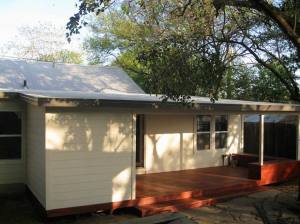 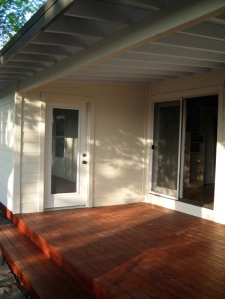 OK, here it is: the finished product of the hard work that has been going on at my house for the past month. First of all, if you live in the Austin area and need a contractor, I cannot say enough good things about Alan Holt Residential. I was very wary of starting this process because I had heard nothing but negative things about contractors, the ordeal of home renovation, basically everything involved. Alan proved to be the most honest of contractors. He is extremely detail oriented and he finished each phase of the project faster that I would have ever thought possible.

So, the pictures are of the back of the house. What isn’t pictured is that they raised the ceiling on the inside of the house and replaced all 15 windows. All that is left is finishing the trim on the house and replacing the front door. That should be completed in the next week or so. I obviously need to start on the landscape.

We’re getting close to finishing out the rest of the studio. But that project was stalled when I was kicked out of the house for awhile. I’ll post those pictures

Thanks to everyone who let me unexpectedly crash at their house when mine became unlivable, to those who let me do my laundry at your house, to Blair for letting me know about the Hilton Fitness Club’s showers (yessss!!!!), all the kind words of encouragement and once again to Alan for making it all happen.